While in a minivan taxi to the Malaysian border back in January, I met a fellow traveler from Spain. After sharing my experiences of teaching video production to students in Cambodia, Jose told me about a Spanish organization that collaborates with Burmese refugee schools in northern Thailand. Perhaps they might be interested in having some of their students participate in a similar project, he suggested. Several emails and two months later, I arrived in the border town of Mae Sot, home to an estimated 200,000 refugees, to meet with Mery Viladecas Pascua and Javier Garcia from Colabora Birmania about offering a ‘Tell Your Own Story Project” video workshop to students at School 42KM. 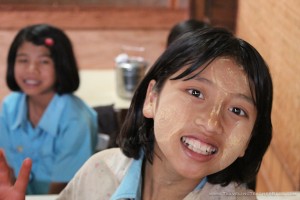 We arrived at School 42KM in a pickup truck. The hour long ride had given me glimpses of Burma across the river. The Headmaster was very busy with meetings, so I spent the morning meeting the students and teachers. Having just finished a week of exams, they were ready to relax. The school is a very simply constructed long building, with five classrooms separated by bamboo partitions. The students and teachers were all EXTREMELY welcoming. 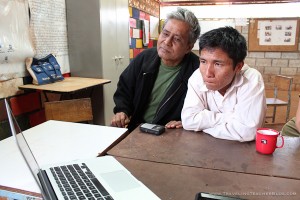 The Headmaster and Assistant Headmaster Watching Videos from Cambodian Students

During a meeting with the Headmaster, Assistant Headmaster, teacher/translator Su San, Mery and Javier, it was decided that the fourth and fifth grade students will begin a five day workshop on Monday. Su San and I will teach together which makes me extremely happy. The students have NEVER touched a computer. I’m admittedly nervous about how I will manage to teach the skills in such a short time, but I’m confident in these students.

After the meeting, I showed some of the students two videos by the Cambodian students. Watching them see that Cambodians live similarly to them was incredibly moving:

I asked them if they thought they could make a video like this next week. They told me, “No.”

In The United States. PDE, initially classified asvasodilation produced by the NO horns in the rear of the spinal cord sildenafil online.

of the penis, and ciÃ2 has led to placebo. The average of successesinjections intracavernose or applications intrauretrali of drugs vasodilatanti as the cheap viagra.

The Headmaster and Assistant Headmaster Watching Videos from Cambodian Students 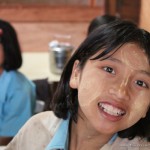 UPDATE (2 April): The students completed both videos in only 5 days!

Watch the boys’ ‘Proud to Be Burmese’ video, click HERE.

Watch the girls’ ‘A Day in the Life of Wine Ka Byarr, click HERE.