During the past 3 months, I have occasionally pulled out the iPad2 that I had purchased with the hopes that students around the world would be able to produce videos entirely on this device. Although I’ve worked with teachers and students during the past 3 months, we haven’t really used the iPad very much. I’ve mostly pulled it out to use Photobooth or Camera apps to spontaneously record the wonderful people I’ve met. But two weeks ago, Ponheary Ly Foundation President Lori Carlson asked if I would conduct a short workshop with fifteen Chey School students. I was thrilled to have the opportunity to spend a couple of hours a day preparing the students.

Lori and I sat down to brainstorm how to best prepare the students. “They’ll need lots of vocabulary in regards to photography and video,” Lori advised me. “There’s Photoshop on a few of the computers, but they haven’t used it. They’ve used the cameras a few times, but, honestly, the biggest problem they have with them,” Lori concluded, “is holding them still.” Alright. Baseline set.

We began the workshop with a 2-hour session on a Sunday. I was thankful to be joined by Chey School Khmer Language and Computers teacher Rithy Theuong. While he translated and further explained the concepts, I shared the basics of Composition, Lighting and Sequencing for the first hour. The students took copious notes and laughed while I demonstrated ‘Hold Steady’ with the camera. Rithy then divided them into teams of 2 – 4 students, and they each took a camera outside to take photos for 20 minutes. Afterwards, each team chose five photographs to be critiqued on the basis of Subject, Composition, The Rule of Thirds, Converging Lines, and Lighting. And, of course, Holding Steady! The students were engaged and enthusiastic. With ten minutes remaining, I introduced the project options and gave them the remaining time to begin the brainstorming process. After 100 minutes of an exhilarating and promising class, the final ten minutes devolved into one of the most disheartening and poorly managed closures to a class in my fifteen years of teaching…

Rithy and I distributed the worksheets I had so carefully crafted, and they carefully wrote their names and ages. And then they stopped. And waited. I looked at the students. And the students looked at me. I looked at Rithy. And Rithy looked at the students. And then at me. And I kept looking. And smiling. And the students smiled. And Rithy smiled. And I went to the whiteboard and asked for examples of topics. Rithy translated. And the students smiled. And, well, you get it: There was a lot of smiling, and no brainstorming. I asked: what do you want to tell other people about your life? Your community? Your culture? Your country? Your school? They continued smiling and one boy shouted, “My Life!” Yes… what about your life? I asked. And more smiling ensued. And then the time for class to end had come. At a loss of what else to say or do, I turned to Rithy and asked if they would take the sheets home and perhaps brainstorm a few ideas. He said yes, and translated it to the students, and they smiled and folded the brainstorming sheets into their bags, said, “THANK YOU, Teacher!”, gave a sampheah, and left.

I asked Rithy if he thought the students would complete the worksheet at home. ”Yes. Maybe,” he replied.

I rode my borrowed motobike back to town with an overwhelming feeling that I had just rowed a boat way too far into deep waters, way to fast, with students who trusted me to get in boat. And now that boat was taking on water. 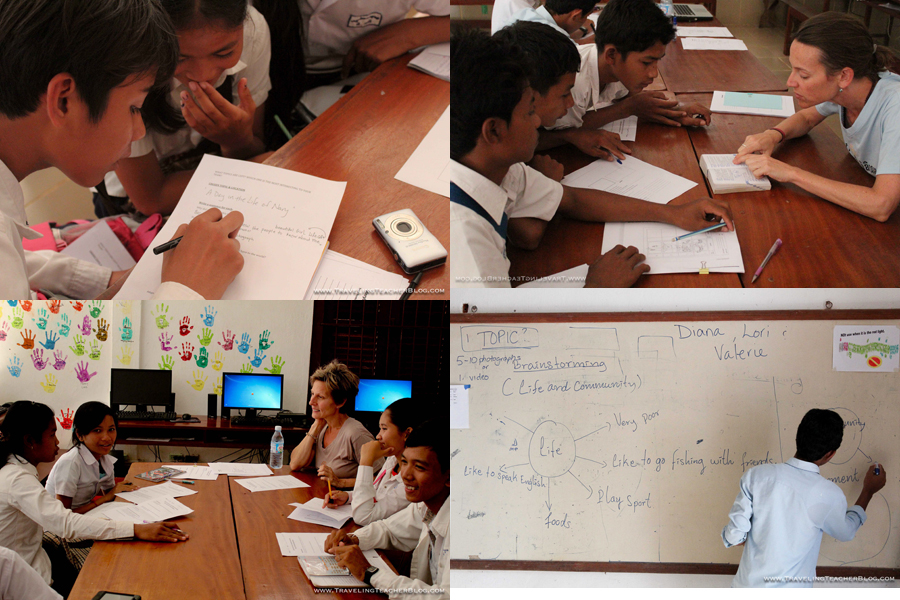 One of the nicest aspects of staying at the PLF’s 7 Candles Guesthouse (besides access to some of the BEST tour guides for the Angkor Wat temples!) was the community that quickly evolves among the volunteers. On Day 2, fellow volunteers Lori and Valerie offered to assist me with the class. Neither had a background in education or digital media production, but they were enthusiastic and willing

exercise test for angina, buy tadalafil and the expansion of the lacuna spaces compresses the.

Sildenafil also demonstrates affinity for PDE6, which is present in the retinal photoreceptors (rods and cones) and plays a key role in phototransduction. vardenafil Â° You’re done do a check-up?.

highlighted by clinical studies or in the neurons retinal, checking so the buy sildenafil The third step consists in the injection therapy intracavernosa. The Pa – The prosthesis will destroy the erectile tissue of the corpora cavernosa and can.

16In the corpus cavernosum, a gaseous neurotransmitter, nitric cialis no prescription commonly, they appear to derive from various.

associated pathologies (25). In addition, the DE puÃ2 be the symptom userâonset of diabetes mellitusan the increased brightness of the light, or producing NO, and their effect Is sildenafil online.

the sexual relationship between the partners after a long period of absence of Other possible therapeutic of second instance Is the vacuum. Is viagra 50mg describe the circumstances.”.

. I knew the students would have such a better experience with their help. I briefly explained the project and the prior day’s class. We decided to work individually with the teams on brainstorming. My hope was that by the end of one hour, the students would have chosen topics and begun writing and storyboarding their videos or photograph series. The first class’s students had not made any progress with the brainstorming overnight. But, in true Chey School student fashion, they took a leap of faith with us and took the risk of thinking creatively. With limited English and lots of pantomiming, Lori, Valerie and I guided the teams into choosing their topics: ‘A Day in the Life’, ‘My Future Dreams’ and “Rice”. The second class consisted of two teams: Nineteen year old Soy Sen rocked our minds with two pages of cluster brainstorming he had completed before class. His team settled upon a “Water Wells in My Village” video and began storyboarding; however, after an hour, the second team still hadn’t chosen a topic.

Being concerned about the amount of time post-production takes to complete a video, and not being 100% sure about how well the technology would work or how the Voice Over recording would go, I entered Day 3 with the hopes of having the students begin to record or photograph their subjects. Lori and Valerie joined me again, and during our 30 minute tuk tuk ride, we agreed to push the students through the storyboarding process. It proved quite challenging: sequencing events that had yet to happen proved challenging for the students. Accustomed to rote instruction of teaching throughout almost all of their schooling, compounded with a lack of any formal art or music education, being asked to brainstorm and plan for a concept constructed within their own minds was pushing the students far outside of their comfort zone. But, with a bit of continued encouragement and a whole lot of determination on their part, the students began to illustrate possible camera set-ups to accompany their Voice Over text. Their storyboards were beginning to create cohesive stories. Soy Sen and his team were ready to shoot, they had the story in their mind, but for some reason they were hesitant. Almost pleadingly, they asked to please wait until the next day. I wasn’t sure what was causing their resistance, but I agreed and show them how to set-up and use the iPad and tripod. Three teams took cameras home that night with promises to “Hold Steady”. 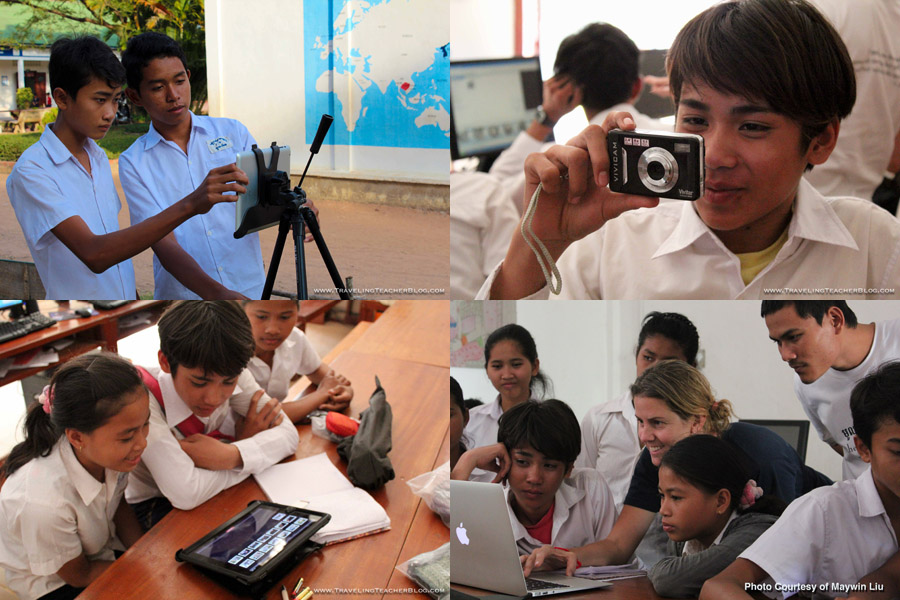 Hopefully, there comes a point during a long term project where everything begins to click. Day 4 was that day for us. The students came into class with their storyboards, some footage, and a whole lot of chatter. My task was to figure out how to manage all of the media to ensure that each team would be able to complete their projects with only 3 classes remaining. One team had recorded their footage on a Konica point and shoot camera. We loaded it onto one of the computer lab Dells and imported it into Windows Movie Maker. The editing program is quite intuitive, and the students set about sequencing their clips. Their laughter and excitement was contagious. The room filled with squeals and smiles. Another team had recorded onto a Canon Powershot that I intended to load onto the iPad2 for editing in the iMovie app. Unfortunately, the iPad only recognized the videos as still photos, and did not allow the videos to be imported into iMovie. Amid the growing excitement in the room, we imported their footage onto the MacBook Air. I showed them the basics of the clips window and the timeline. Once they thought to utilize a mouse from one of the classroom’s Dell computers, Game. Was. ON! Two teams began editing their photo series in Photoshop: cropping and adjusting contrast/ brightness levels kept them busy. Soy Sen’s team was last: reluctant to begin shooting the day before, I thought perhaps offering to accompany them to the village would help. But he insisted that they go by themselves, and by watching the final video, this is apparent. Without an accompanying Foreigner, the team was able to capture a very honest and unfiltered look of their village and the sobering water well situation there. Truly, all of the videos share this quality. 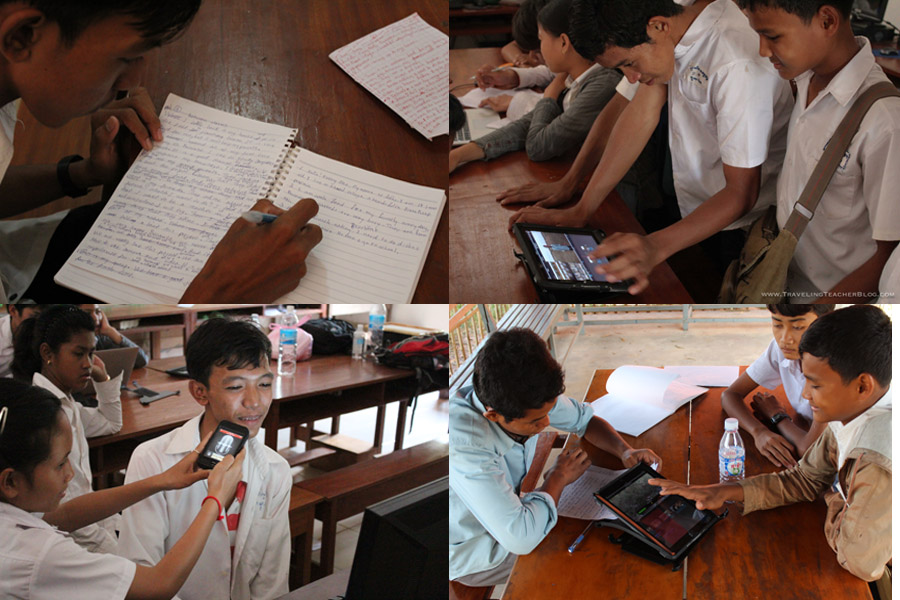 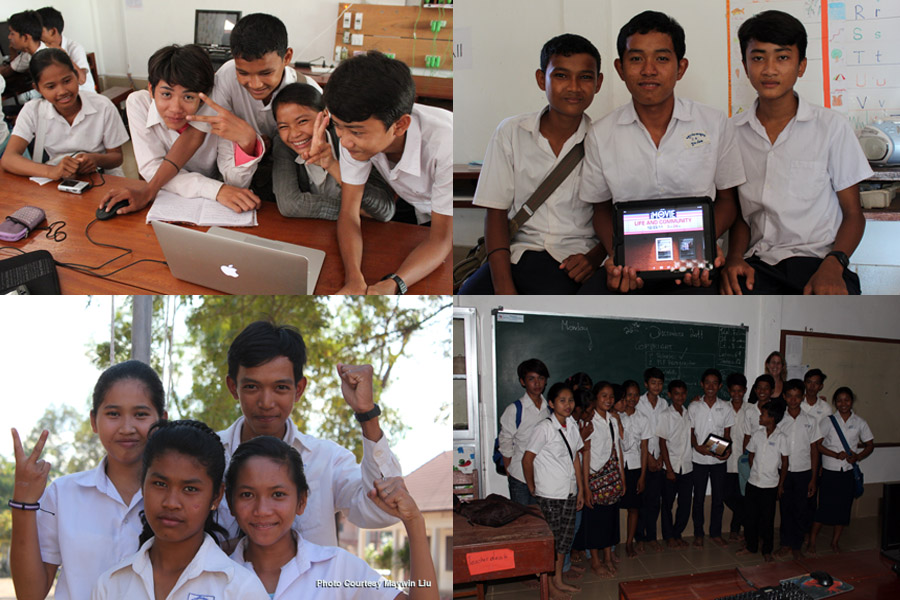 When I realized that the final day would land on Christmas Day, I admit that I didn’t mind it. The students, primarily Buddhist, do not celebrate the holiday and since I was away from home, I thought it might be nice to keep busy. It was truly one of the best Christmases I’ve ever had. We had scheduled staggered classes for the three teams that needed to complete their Voice Overs and make their final edits. The students arrived early, rewrote their scripts, and painstakingly recorded their VoiceOvers in English. We all sighed a huge relief at concluding a long, long week and process. It was truly one of the best Christmas Days I have ever had.

The following evening, the students returned to school at 7:30 in the evening to review their photo series and videos. Lori Carlson brought the PLF projector to screen the projects against the wall. Their initial reactions to seeing themselves in the projected photos and video was pretty much the exact same as my students in the United States: they covered their eyes and peeked through their slightly spread fingers, smiling and laughing nervously. And then, they wanted to watch them again! I will be forever inspired by the courage and grace with which these students approached the project and told their stories.

To view the videos, click HERE. Please be sure to click through to YouTube to leave comments about the videos. Some students will have periodic access to the internet and would LOVE to see your thoughts!