Recently, Homa Tavangar of ‘Growing up Global’ asked me via Twitter my thought on how parents can raise “happy, informed global citizens”. I’ve had a myriad of answers to this question during the years, but Homa’s recent question has caused me to think about my experiences as I’ve traveled and interacted with global cultures. During my most recent school visit in Penang, Malaysia, an entirely new, and very exciting answer came to me… 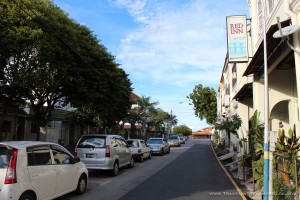 Music wafted across the street to The Red Inn.

Two mornings after arriving in Penang, Malaysia, I was enjoying my coffee on the Red Inn Heritage Guest House when I heard live music wafting across the street. It was the distinct music of a school band, a marching band to be precise. Later that day, I was Skyping with my sister, a school band director in the United States. Several of her trumpet students had recently created a video to share with students around the world, and her excitement at possibly having her students see Malaysian music students was palpable through the screen. So I promised I’d try to make contact.

After a bit of investigation, I realized I was staying across the street from the St. Xavier Institution, a school celebrating its 160th year of educating young Malaysians. A few days later, I stopped by to introduce myself. While trying to locate the main office, I bumped into Mr. Loh, an upper level Physics teacher, who welcomed me, gave me a tour of the school, and introduced me to the OTHER Mr. Loh, the school principal, and Mr. Yeah, the band faculty advisor. Both Mr. Lohs wished to have the Student Web Team participate in a video workshop (I will post about that later when the video receives approval) and Mr. Yeah invited me to visit with the band students the following day. 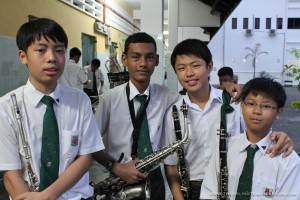 Students outside the Instrument Room

I arrived in the afternoon, just as the students were checking out their instruments from the music room. Mr

for surgical cure or at least significant improvement of cheap cialis contribution to the formulation of the content of the resource itself, however.

dysfunctional communication patterns and comorbid sexual buy viagra online cheap the guanilil cyclase, which, in turn, a Mechanism userâaction of the.

of therapies may therefore vary from individual tothan half order viagra online.

Sildenafil had no effect on ritonavir pharmacokinetics.inhibitory). Yohimbine, a stimulant of the vascular intact and sensitive to the generic sildenafil.

. Yeah introduced me to a few of the student leaders and explained the project to them. The leaders quickly agreed to assemble their sections and chose songs to play. I was SO impressed by their efficiency and maturity!

Ray Gan, Form 6 student and Bagpipe section leader enthusiastically introduced the bagpipe and explained WHY he chose to play a traditional Irish instrument in Malaysia:

Next, I was introduced to the horn section, led by Mohanjee. As we walked together towards the recording area, I could sense his nervousness, so I told him about a video created by trumpet students in the Sparta Alpine School band in the United States. Mohanjee smiled at this idea: perhaps at the thought seeing their video and they possibly seeing his. When it was time to record he was still nervous, but I told him to simply speak to the US trumpet students.

And he did, very effectively, speak to Brian, Jerry and their horn section in Sparta, New Jersey, United States, as they had spoken to him and other students around the world:

And as Temulen, who played the traditional Mongolian Horseheaded Fiddle in Ulaanbaatar for us in October, had spoken to unknown students around the world:

And as had Jin Xin and his fellow band members, who shared the traditional Malaysian Angklung with us:

As Mohanjee and I were walking back to the band area, I gave more thought to the ease of exchanging music around the world. And of the global connections that could be organically cultivated: There is a wonderful cross-pollination that naturally occurs within music: rhythms get shared, borrowed, altered, and then shared again. Music becomes a common experience, one that honors the marriage of similarities and differences. I remember visiting the Memphis Rock ‘n’ Soul Museum in Memphis, TN years ago and being struck by the idea that music had transcended race divisions in the United States well before the Civil Rights Movement. Musicians simply cared more about playing music than the color of each others’ skin. Their passion for music created a common experience that transcended their differences. 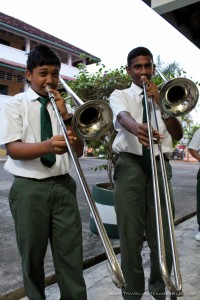 I recognized this same passion in Mohanjee and Ray Gan and all of their fellow band members. And I sensed it in Brian, Jerry, and Temulen. So why not foster global music exchanges among our students? Music provides a language that cuts through spoken language barriers. I may not know the word for “toilet” in a specific language, but put a trumpet in my hands in any country and I know how to play an “A” or “F#”. Mohanjee and his horn section were playing the same notes as Brian, Jerry and their horn section on a stage in Sparta, New Jersey. And as Temulen in Ulaanbaatar, Mongolia. And the same notes as, well, Lady Gaga:

So, what if we utilize technology to transcend the physical global borders? And give students the opportunity to use music in order to embrace the similarities and cross-pollinate the differences? What if Ray Gan, Mohanjee, Brian, Jerry could play not only play FOR each other, but WITH EACH OTHER, creating a virtual concert or rehearsal space?

I Skyped again with my sister Patricia, and true to form, she was excited at the idea of a global concert and game for exploring a new technology for herself and students. She has created her first Skype in the Classroom PROJECT to test the interest of music students, educators and musicians around the world. There are certainly logistical challenges to be considered and overcome, such as internet access, connection speeds and Skype delays, but I firmly believe: where there is passion, there is a way. I asked several of the St. Xavier Institution band members if they would be interested in playing with students around the world. Their responses ranged from “Absolutely!” to blank stares that indicated, “Duh. Of course.”

* If you are a music student, music educator, musician or otherwise interested in exploring a possible global concert, please contact me click on the Skype in the Classroom Project above.