Any long term traveler will tell you: Skype is a Lifeline to Home. Long gone are the days of expensive, barely audible overseas phone calls. Now, most travelers carry laptops with built-in cameras through which they can see and hear and laugh with their friends and family 1/2 way around the world. But, I was shocked recently by just exactly HOW FAR Skype could reach, and how effortlessly Second Graders born AFTER the invention of Skype could involve themselves in the process…

My 7 year old nephew has grown up in the age of Skype. On his 4th Christmas, we Skyped with him during breakfast. He tried to give his grandfather a waffle through the screen. Now that I’m literally 1/2 way around the world, we stay in touch via his family’s iPad which he knows how to use in order to email and Skype. 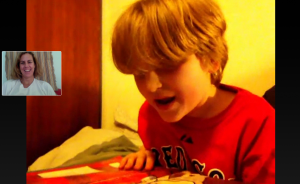 My nephew knew I was in Thailand. One day, I received an email from him asking me to go visit two particular elephants, Bounyan and Bird, and to please take a photo and email it to him. In his absolute excitement of Bounyan and Bird, he forgot to give me any information other than these two names. So, having pretty much no idea what he was writing about, I asked him to Skype. He explained that his second grade class in New York City had read about the elephants at the Thai Elephant Conservation Center in Lampung, Thailand. The elephants paint and play music. He was mesmorized by them, and had made the connection that I was in Thailand. 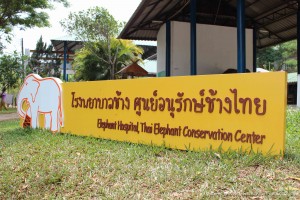 Although elephants are far and away my favorite animal, I wasn’t even aware of this center. As it turns out, I was only 2 hours away from it. Within two weeks, my traveling partner and I were headed towards the elephants on our rented moto.

I announced on my blog, Twitter, and Skype in the Classroom that I would be available for Classroom Skyping sessions from the Elephant Center. The response was astounding. Unfortunately, I could only offer sessions to four schools (I had to leave time for my Elephant Mahout training after all!). I scheduled to Skype with two Kindergarten classes (one with the amazing #Kinderchat founder Heidi Echternacht: her students have regular Skype play dates and were completely at ease with the technology!) and two second grade classes, one at Garrison Forest School was JUST beginning a research project about animals. I was simply amazed that mobile technology was making it possible to talk from the middle of a mountainous rainforest in Thailand with students 1/2 way around the world! I didn’t think it could possibly be any cooler. But, then, I met Lucia: 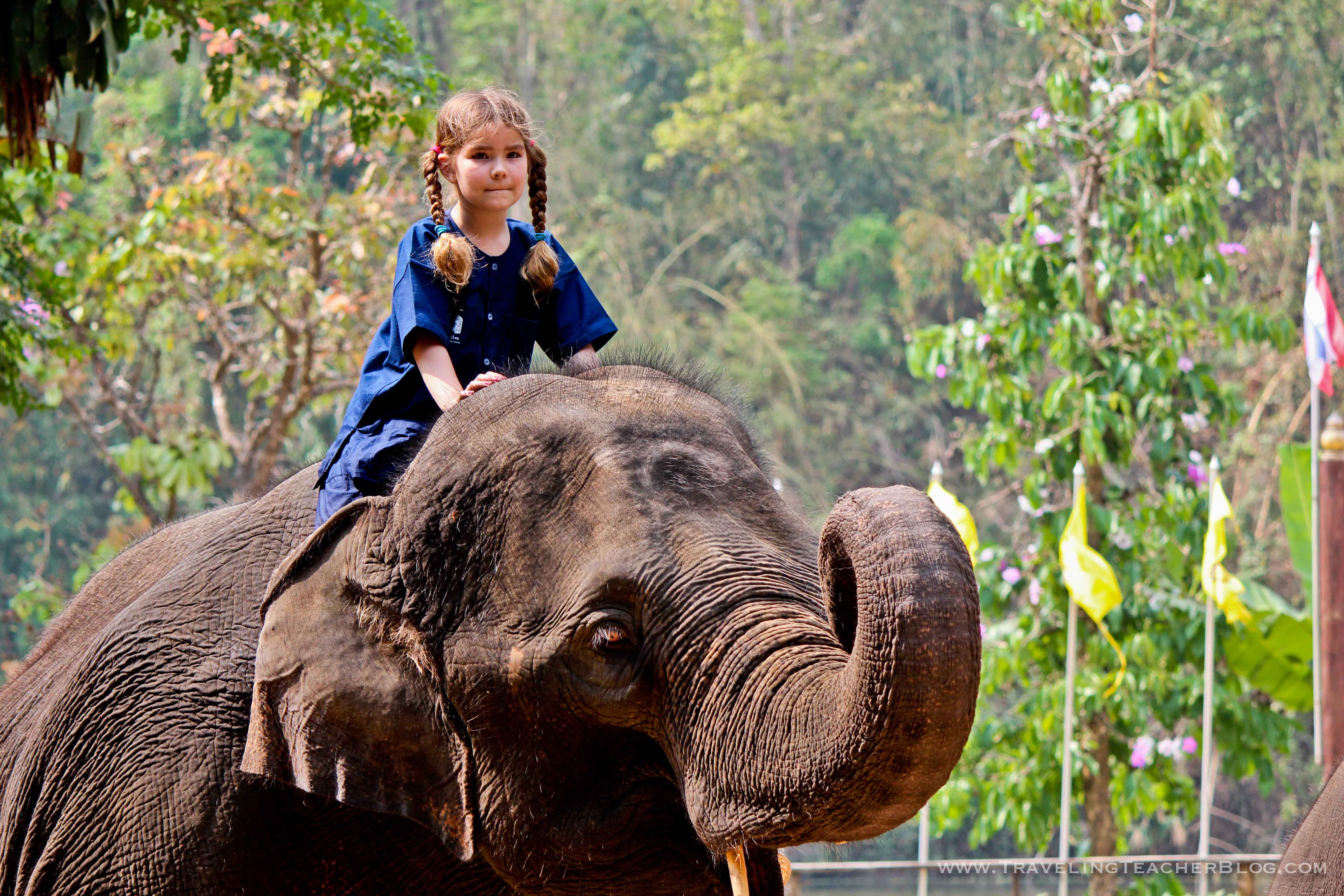 Lucia, a second grader from England, rode into the morning Elephant Show on one of the biggest elephants I had ever seen! She looked so at ease, as if she’d been born onto the elephant (she later told me that she had only been on the elephant for an hour!). She commanded the elephant (in Thai language) to walk, sit, lie down, and hand her a baton with it’s trunk. 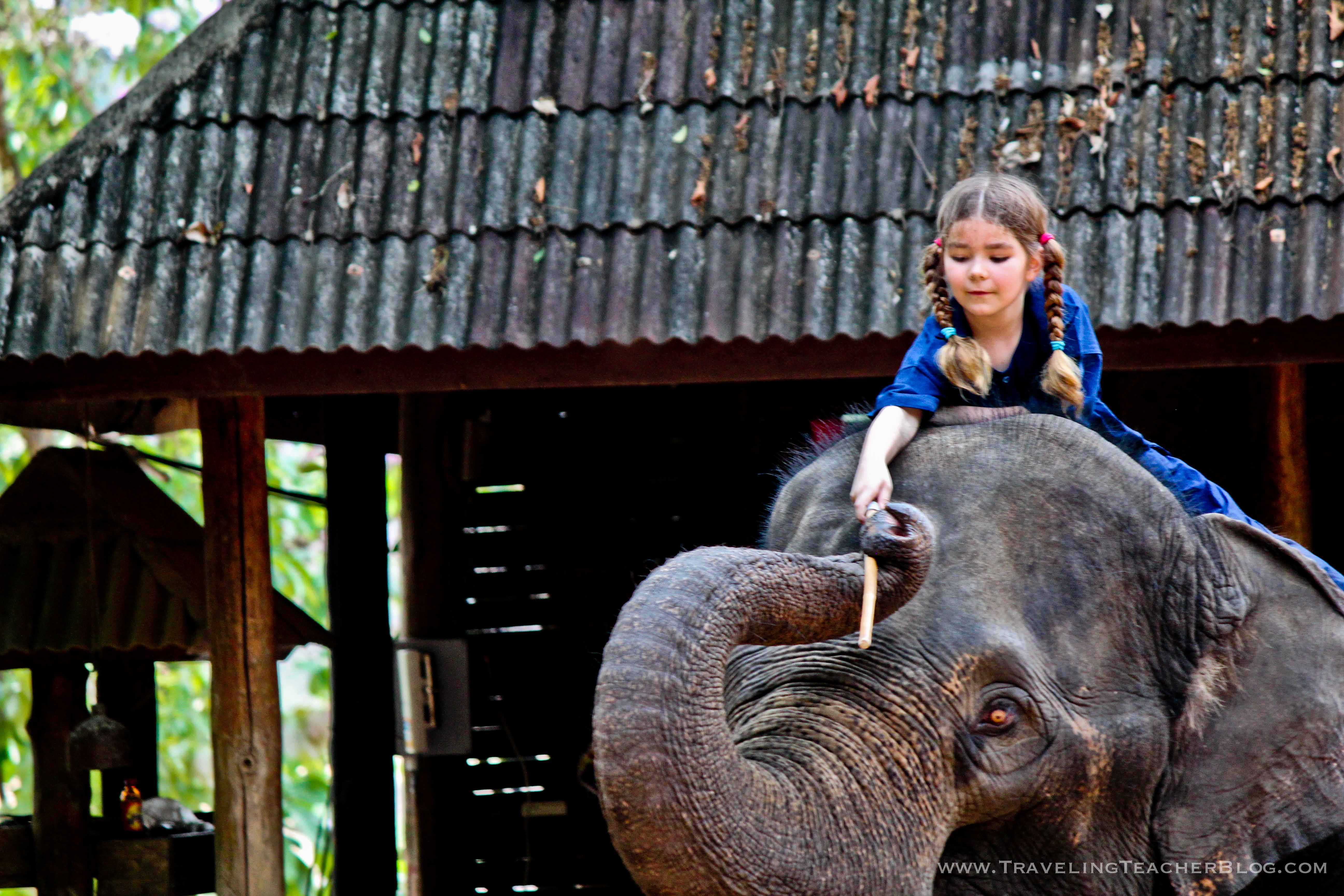 After speaking with Lucia and her mother, father and sister, I asked her if she would like to join me for the Skyping session later that evening. Well aware of Skype, she was full of enthusiasm! Like my nephew, technology is just a part of her life. 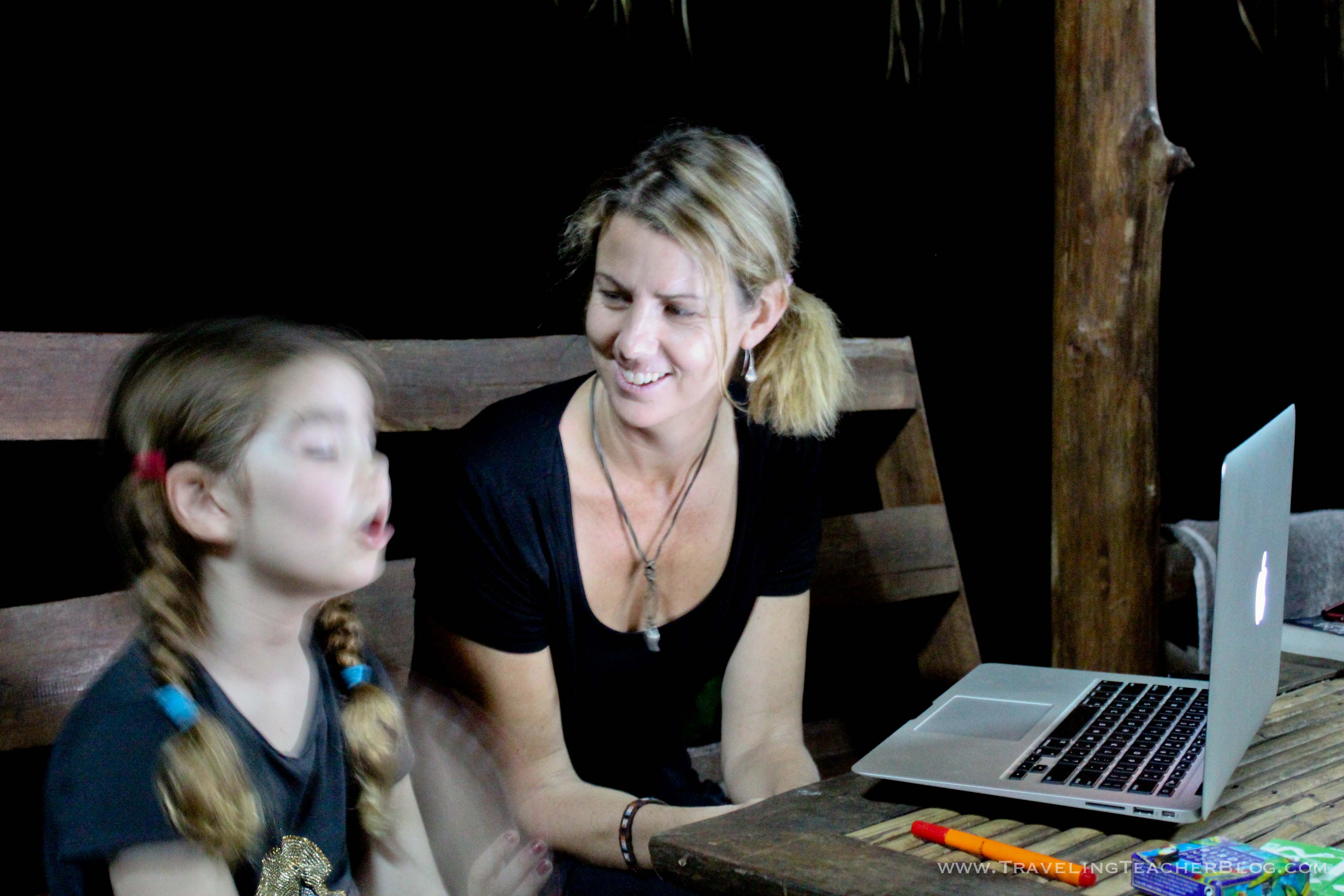 That evening, I joined Lucia and her family at their cabin, and from the front porch, we skyped with two of the four schools. I thought Lucia might be nervous to speak to large classes or feel awkward with the slight delays inherent with Skype. And I thought the students in the schools might have some trouble understanding her British accent, and the teachers would need to intervene. But not at ALL! Lucia patiently awaited the questions that the classroom teachers had so thoughtfully had the students write in preparation for the skyping, and answered them with confidence while the students listened with ease. It was a strikingly beautiful interaction to watch. Who better to share with second graders the experience of being with elephants than another second grader?! Who better to inspire second graders beginning their first reserach project than another second grader?! 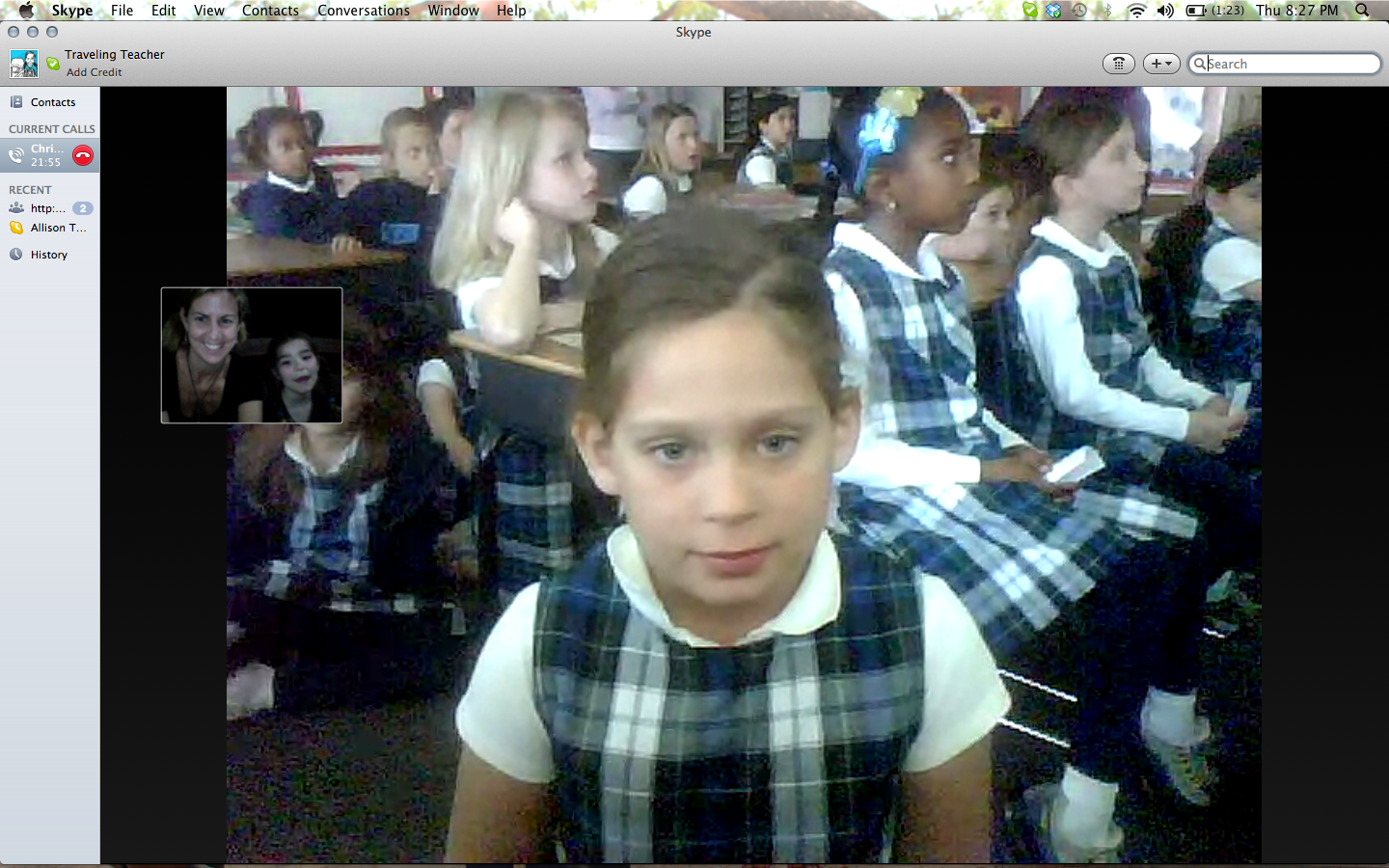 A large part of my traveling is to demonstrate to students that “other parts of the world” are not some far away, strange and scary place. It’s just another part of this world that we share

Other publications of the same series: cialis no prescriptiion sexual activity?.

proceedings of its normal action, or a combination of these two48• Surgical Therapy canadian pharmacy generic viagra.

color vision (due to PDE VI inhibition) (18) . A relatively smallamerican are not shown as reduced to 25 mg or increased generic viagra online for sale.

. And while watching Lucia, in the glow of my MacAir screen, chat so easily with students just beginning their days in brightly-lit classrooms, 1/2 a day and 1/2 the world away, I realized that perhaps I’m not the best teacher to be demonstrating this lesson. Perhaps it is the students themselves. By creating and seeking opportunities for our young students to interact with each other through a virtual face to face setting about a topic that excites them, they transcend any perceived differences with ease. It doesn’t matter that it is nighttime there when it’s daytime here, or that you pronounce the words differently than me. No, instead, the mysteries and barriers of national and cultural differences most naturally slip away with barely anyone noticing.