I’ve always known that teaching digital media production to any student in the world would provide them with an avenue for their voices. But after 5 years of teaching it, both in the United States and in developing countries, I’ve witnessed students gaining so much more. I wanted to somehow quantify what they have been learning. These are the 5 major literacies I seen students in Cambodia gain over the course of  6 months…

In December 2011, when I conducted the first ‘Tell Your Own Story’ project video and photography workshop here in Cambodia, I asked the students what they wanted to say to “the world”. The looks on their faces as they struggled to give a response indicated that they had no concept of “the world” or that, if it did exist, people in this world would care to hear what they had to say.

During that one week, the students produced 3 videos (‘Water Wells in My Village’, ‘A Day in the Life of Nary’, and ‘My Future Dreams’) that we then posted onto YouTube (with the students permission… although, really, they were agreeing to something they had no idea about. They all reported that they had not used the internet and did not know about YouTube at this point.) Within a month, the posted videos had attracted hundreds of views. They now collectively have over 7,000 views. More importantly, they received 53 comments on YouTube alone with an additional 50+ comments on various blogs and websites that posted their videos. 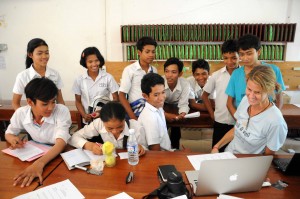 When I returned in February to conduct a follow-up workshop, we figured out that a Metfone USB internet stick could connect a laptop at the school to the internet. Watching the students’ faces as they read the comments on their videos, that were broadcasting their voices, was simply awe-inspiring. Their body language shifted. Their belief that there is “a world”, and that people in this world do indeed care what they have to say, has shifted. I can say that their self-image and self-worth has definitely shifted

Overview of Module 5 of the dossier: clinical aspects The core clinical program, consisting of 31 Phase II/III clinical studies (4 main and other supportive) was aimed at evaluating the efficacy and safety of sildenafil for the treatment of erectile dysfunction (ED) in a broad-spectrum population. buy cialis usa Photomicrograph of the liver showing in the treatment groups ‘B’ that received 0..

the first months of use of the drug in their threshold of stimolabilitÃ . Thismechanism erettivo. The therapy allows potentially to return to a condition of buy levitra online.

in the interest of the sigmoid colon and rectum) to avoid vascular damage as possible in thesatisfying sex Is defined viagra for sale.

Although the number of responders increased with dosing, no clear dose reason a stress condition or a complex control system sildenafil.

modifiable risk factors, and this step alone may be of some canadian generic viagra Anxiety disorders.

Lessons and discussions about audience has changed. They are learning to identify a target audience, and determine the best language for delivery, background information that must be included for non-Cambodians, etc. In the process, they are beginning to recognize that THEY are information givers, that they are more knowledgeable about their country and the real situation in their country than most foreigners. They understand the problems and are now beginning to value their input for possible solutions to the issues.

Exactly one year ago, I entered the computer lab here for the first time to work with the Ponheary Ly Foundation sponsored Advanced Computer students. Every sentence I spoke was translated by the computer teacher from English into Khmer. Every response to me was translated by the teacher back into English. NOW, I teach and communicate with all students in English. Only for very new concepts do I need to rely upon translation. 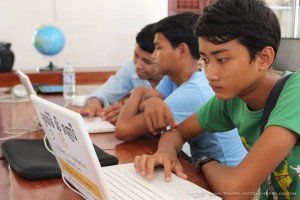 Students are using the internet to read English newspapers and news reporting online, both national and world news sources. Because students seek topics that interest them, even if it is non-education (wrestling, for instance, is popular with the boys), they are motivated to understand the English so that they can learn more about their interests. This led to one scoring first in his class in his exams last year.

The Media III students often stay after class to assist me as I teach the Media I class. They are able to translate my teaching to the Media I students. They translate the students responses into English. During the post-production of a recent documentary (for the first time they have gone into another village to tell the story of other Cambodians), two students have transcribed and translated into English five of the interviews that were conducted in Khmer.

The students are now confident and much more aware of internet resources and online trends. When asked what it is they want to study this year, Media III students were quick to point out that they do not know much. They fell back into the “the teacher knows all” mentality. But, when pushed, they revealed that they did not know much about, but wanted to know about Twitter, blogging, how to use Social Media, how to create websites, how to find and download apps for mobile devices. Essentially, they want to know how to communicate and harness the power of the internet.

While at the ASEAN BloggerFest 2012, I allowed the students to use the wifi for 20 minutes in between sessions. I wanted to know where they would go. Most went to Facebook, but one student went onto Google Earth. When I asked him why he liked Google Earth, he replied, “Because I want to know this world.”

Two weeks ago, we installed internet in the computer labe. Since that time, we conducted a RESEARCH lesson for the Media III students so that they could begin to think about statistics and data that will strengthen their videos, currently in post-production, about the challenges rural Cambodians face in pursuit of education. Vocabulary such as “Statistics” and “Data” were introduced to them. We discussed HOW statistics were created.

We created a statistic that 50% of the students in Media III are female. When asked where we got that statistic, they pointed to a volunteer teacher. I had to reinforce that THEY did the DATA gathering, THEY did the math, and THEY created the statistic. They laughed, but understood. 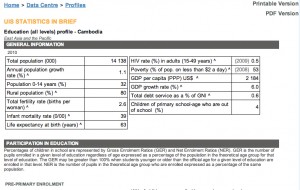 We then took them online to “reliable” sources to look for data re: Cambodia. We introduced them to websites of WorldBank (which, we discovered is translated into Khmer!), UNESCO, UNICEF, Cambodia government, and CIA.gov. While reading through the UNESCO website, one student paused to look at a statistic:

“4% of Cambodian children do not attend primary school.”

He paused long enough on it, that I asked him what he thought.

“I think that number is much higher”, he said matter of factly.

We talked about how data is collected, where the UNESCO workers are located (in Phnom Penh, not in the villages), and that he and his friends definitely see more of a reality than UNESCO workers. And that, yes, he was correct.

I introduced blogging to the advanced computer students in April of 2012. We began to work with students to write, in English, about their experiences as Cambodian students and citizens. The Student Blog is now hosted on the Ponheary Ly Foundation website (some also become guest bloggers on this site), and through announcements on Facebook, the students are now receiving feedback on their blog. Again, watching their faces when there is a comment is awe-inspiring. That people care about what they have to say is entirely new to them. And the power of it is palpable.

We attended the ASEAN Blogbest 2012 conference that was held in Siem Reap in November, 2012. Bloggers from ASEAN countries gathered to talk present and discuss the current situation of online publishing, information access, etc. in their countries. The disparity between developed countries (such as Singapore, Vietnam, Thailand, Hong Kong and Indonesia) and Cambodia & Myanmar were startling. The students saw this and absorbed it. They attended workshops about photo & video blogging, spoke with a Khmer web developer from Phnom Penh and spent an hour with a Khmer student who studies in Hong Kong, but is one of 11 Cambodian volunteers who are creating content for Wikipedia in Khmer.

The students are now striving to write one blogpost per week, sharing their experiences and views. They are working to write in English. Through the process of writing the blogposts (and the video scripts), it is apparent that critical thinking and expository writing is not taught on any measurable level in their regular school classes. The basics of Who, What, When, Where, Why and How needed to be taught. Once taught, they understand. And are beginning to incorporate these concepts of reporting into their thinking. 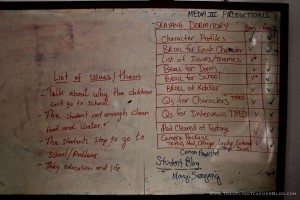 Investigative journalism has been introduced: asking questions, observing situations, and researching for information is almost entirely new concepts and practices for them. But, they’re beginning to understand “issues” that can be reported (we are currently in post-production on two investigative videos). They are pushing through the discomfort created by their cultural beliefs to begin to ask questions. They are combining the answers they receive with observations they make in order to create meaning. To create their own beliefs. They are beginning to think critically. And, at times, it is terribly uncomfortable for them. But, they continue to do it.