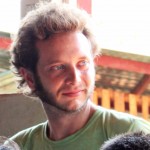 Rodrigo Solórzano, international writer and music composer, joined the Traveling Teacher for a 5-day Tell Your Own Story Project at Burmese Refugee Primary School 42 near Mae Sot, Thailand. He led 8 students in a unique musical and digital photography project. He shares his experience with us…

It appears as a natural pact, an unbreakable edict: the bigger the pain, the bigger the appreciation for the simplest experience. In the information infested mist of routine and the created needs satisfied for an instant, there is no place for amazement for the simple things; the immediate, urgent amazement. The children at The Best Friend School rename amazement, and make it imperative. The workshop that they created did not cease raising the possible looks for an instant, absenting the old dusts that asphyxiate.

It all began as all simple things begin, everything that is beautiful: searching the immediate space for anything that could turn the sound that inhabits into that that leaves us in order to touch the Other. In their hands, bamboos, bottles, plates, stones, and anything that could give voice did it. Voices that imagined created chorals. Rhythms of faces lifted their look to the eye of the Other in search of coincidence. Songs were taken by the voices that urged singing as the next step is urged. All of them, hands and voices, legs and chants, built their music. Our music. The music the can never be forgotten; under its weight, the earth felt the force of expression.

In four days, eight boys and girls transformed that which they could find in the instruments that would become their voices. They also understood that their voice is their best instrument. To witness this was a beautiful privilege. The pact was not broken: from deep pain beauty was born, and with her and only with her, the power of one voice is no longer a possibility, but an imminent reality.