When I was a young girl, my father used to tell me that even the Queen of England had to sit on the toilet. It wasn’t meant to teach me about the bodily needs of the Queen, but rather to impress upon me that regardless of outer appearances, we are all much more similar than we are different. This thinking has remained with me and been a guiding principle as a traveler, and has in part been the emphasis for a new YouTube video collection.

When arriving in a new country, encountering a new culture can be unsettling. New language sounds, unfamiliar smells, unrecognizable foods… But once past this hurdle of feeling out of place, I become relaxed enough to fully delight in the diverse sounds, scents, tastes, ideologies and ways of life. It enriches my life so much that I wish for everyone around the world to be able to feel eased by our similarities and, rather than fear our differences, delight in them. 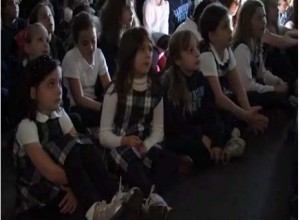 So it was with extreme pleasure that I read an email from Technology Coordinator and Digital Discoveries teacher Chris Shriver from Garrison Forest School in the United States. She had just shared the video 14 year old Cambodian Nary created in my first Tell Your Own Story Project with her primary school students:

“The best part of the experience of watching these videos, however, was the reaction of our very own Garrison Girls, some as young as 6 years old. They watched with quiet awe as the lives of the Cambodian students were revealed through the videos. They were immediately struck by the many differences between the lives of these students and their own lives here in the US. Comments ranged from “she has to do a lot of the things that my parents do, like cook dinner and buy groceries” to “her house doesn’t have electricity.” But in addition to noticing the differences, they also noted several similarities…going school, doing homework, working on computers, and a fondness for Mickey Mouse… It is wonderful to see such wisdom, concern, and compassion in even our youngest of students.”

Chris’s email watered the seed planted by my father so many years ago.

Back in 1995, UNICEF published Children Just Like Me, an incredible resource used by my then Middle School Headmaster and geography teacher Steve McManus. Photographers Anabel and Barnabas Kindersley had spent one year traveling the globe taking photographs of children, showing their homes, schools, families, rreligions, favorite foods, clothing, and hobbies. I’ve always loved the book, but wished that we could also hear the language of the children.

Once technology had advanced enough to enable mobile, low-cost video production, I thought it would be incredible to create a similar series of videos that included the childen talking in their indigenous languages. Nary’s team’s success in the workshop, and the great response from students and teachers around the world, inspired me to bring the concept to subsequent ‘Tell Your Own Story’ workshops. I now share Nary’s team’s video as an example in the workshops, and participants love seeing a girl with whom they can relate, and are then keen to record their own lives in order to share them with the world. There are now three in the collection which will hopefully grow, and be a resource for increasing empathy around the globe.

What do you think about the lives of Nary, Wine and Gay Doh Paw? What are the similarities? What are the difference? Would you like to make a video about a Day in Your Life?

Photo Gallery: Behind the Scenes: The Making of ‘A Day in the Life of Wine

Photo Gallery: Behind the Scenes: The Making of ‘A Day in the Life of Gay Doh Paw’